ABOUT KEYS TO SUCCESS AT SCHOOL AND BEYOND 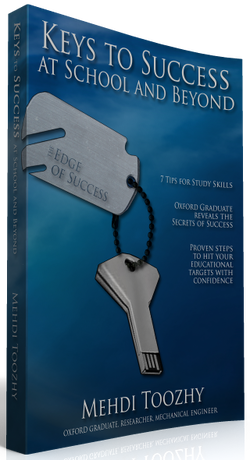 Knowledge is power, and this book will help you know!
In a plethora of possible obstacles one faces at the beginning of the college or university journey, one of the most prominent is the inevitable feeling of the information overload, the overwhelming feeling of saturation with new information. This book provides the insight into the techniques Mr.Toozhy acquired in three different educational systems: Danish, British and German Engineering Standard. The international experience acquired this way prompted the author to write a book that is easy to read and presents the solutions in a clear and understandable way rather than tedious descriptions of study techniques that are time consuming and tiring.

Think smart and consider the big picture!
This book is committed to showing students the main ideas, the direction they need to take as well as the steps to get there, and if there is commitment and will to expend one’s horizons any goal can be reached. This book relies on the experiences of great minds which often coincide with one's own experience in life. These experiences can be applied and provide comfort in the awareness that one can be a successful student and also continue to be successful in the later professional life.

Try to learn from everyone and everything in your life journey!
Thomas Edison is believed to have had learning disabilities and was withdrawn from school to be home schooled, but still became known to have been a very successful inventor, scientist, and businessman whose inventions significantly impacted the world. Inventions such as the phonograph, the motion picture camera, and a long-lasting everyday electric light bulb were all the result of Edison’s work.

Edison said, “The reason a lot of people do not recognize opportunity is because it goes around wearing overalls and it looks like hard work.” There is no success without hard work; success is something that is only earned after much labor. Success can only come to those who labor for it, it is through labor that you become a valuable person, and your value attracts success.

The important idea that this book conveys is that the students who say they do not posses the talent to succeed have to realize that they are the ones who can and must help themselves. This book teaches the importance of the notion that hard work is more important than talent, and provides keys to achieve success and reach the desired goals.

The most influential physicist of the 20th century, Albert Einstein is also believed to have had difficulties in learning and he allegedly withdrew from school, but he is remembered today as an advocate for imagination, curiosity and scientific inquiry, his Theory of relativity and the Nobel Prize in Physics of 1921. Einstein said, “Look deep into nature, and then you will understand everything better.”

“Keys to Success at School and Beyond” is a book that proposes the notion and teaches that everyday life can and should be treated as a university. It provides help for overcoming the challenges and underlines the idea that human beings are immensely powerful when they put their minds into making the World a better place.


According to Mehdi Toozhy, there are 7 keys that help unlock the secret of success;

Purchase the Book
Powered by